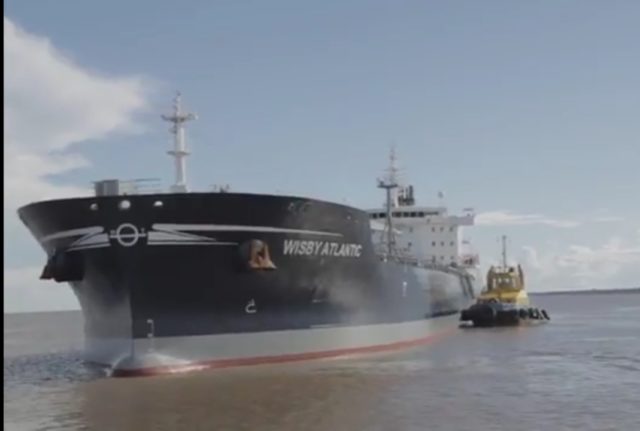 Product tanker Wisby Atlantic (29681 gt, built 2017) run aground on a sandbank at Macapa Roads, close to Pedreiras Island, around 64 km from Macapa.

The Wisby Atlantic was loaded with a cargo of 50,000 tons of oil and was sailing up the River Amazon with a final destination of Itacoatiara, in the state of Amazonas. The specific area where the tanker was sailing by has a depth of 12-14 meters but, as per information, the tanker was on the wrong side of the channel, which was the reason why it hit the sandbank.

A tug from Companhia Docas de Santana (CDSA) was promptly called to help move the tanker off the sandbank and by 1700, local time, May 15, the forepart of the tanker had been released from the sandbank but from amidships to aft it was still stuck. By evening new efforts were made in order to completely release the vessel and, with favorable tide, the next morning (May 16) the vessel was released from sandbank and moved to anchorage area of Fazendinha, where it anchored at 0601, local time, awaiting inspection by port authorities.

In the area where the tanker ran aground, the presence and help of Pilot on board is optional.