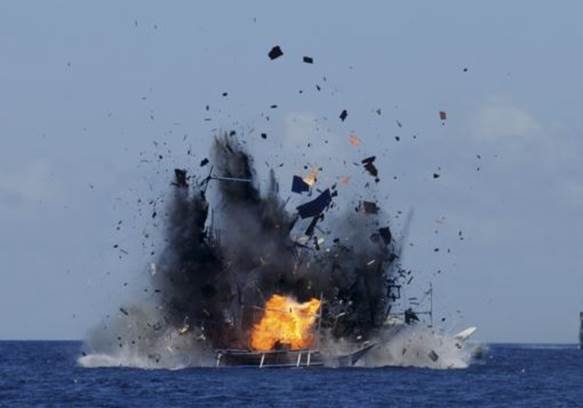 Following encroachment by foreign fishing vessels into Indonesian and Malaysian waters, the two countries are reminding foreigners of their often overlooked claims in the crowded, contested South China Sea by destroying the vessels that take fish from waters near their coastlines. In the latest incident on 30th August, the Malaysian Maritime Enforcement Agency burned two foreign fishing boats as they floated on the sea, in a change from the less visible practice of sinking them. Boat operators from China, Vietnam and the Philippines often slip into waters off the Malaysian north coast of Borneo. In Indonesia, where vessels from the same countries as well as Malaysia come uncomfortably close to shore, the authorities have destroyed a total of 317 fishing boats. 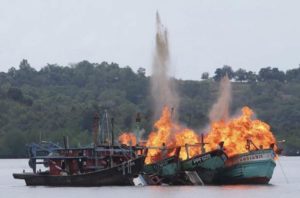 “Indonesia has been doing that, and just this week I think we also heard the same from Malaysia, so it’s maybe just intimidation,” said Termsak Chalermpalanupap, political and security affairs fellow with the ISEAS Yusof Ishak Institute in Singapore. Fishing boats often follow fish, regardless of other countries’ ocean exclusive economic zones (EEZs), South China Sea scholars say, while most Southeast Asian countries lack the fleets to stop every trawler slipping in. The boats do, however, use instruments to tell them where they’re trawling. “Sometimes they belong to let’s say a fishing group, like a seafood processing group,” said Oh Ei Sun, international studies instructor at Singapore Nanyang University. “Sometimes it’s very orchestrated. Very often it’s not like (an) individual fisherman with his very lonely fishing boat straying into the waters of other countries.” Burning boats, the Malaysian-born scholar said, “is just the way things are done here culturally.” It’s unclear whether Malaysia will make boat burning a new normal, but officials have called the fires a warning for other vessels.
Countries struggle to keep foreign vessels away in some cases, because six of the countries dispute sovereignty over the South China Sea, a 3.5 million-square-kilometer body of water known also for oil and gas reserves. The waters off Borneo are part of that sea. China and Taiwan, both with active fishing populations, claim almost the whole sea. Brunei, Malaysia, Vietnam and the Philippines claim parts of it. Fishing boat intrusions are unlikely to become a diplomatic issue, but the 10 members of the Association of Southeast Asian Nations (ASEAN) will tell their fishing operators to “respect neighbors,” 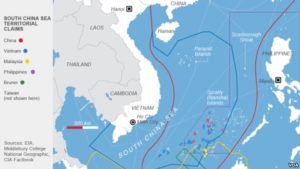