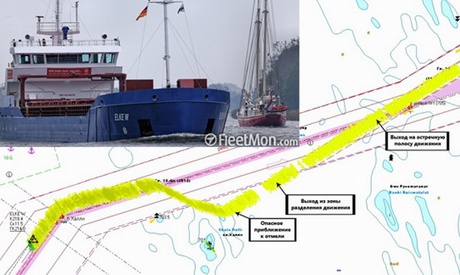 The general cargo ship Elke W (2409 gt, built 2006, Antigua & Barbuda flagged, German owned and managed) ran aground on rocks when passing light buoy No.1 near the Halli Rock islet when it was transiting the Vessels Traffic Separation Zone in the approach to the Gulf of Vyborg near the Finland/Russia border while en route to La Coruna at around 05.00 on 2nd September.
It is reported that the ferry did not change course despite several attempts at contact by the local Marine Traffic Control when it was realised that it was not proceeding in the correct direction. It is also reported that the ship finally changed course, but not in time to avoid running aground on the rocks. There has been no information on the cause of the accident or on damage.
(Marine Traffic Control display screenshot from http://www.morvesti.ru/detail.php?ID=65702)