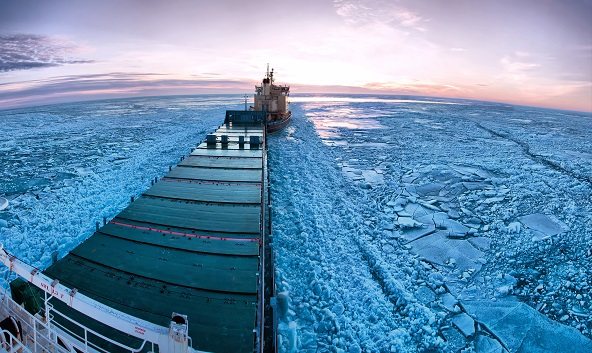 Potential route could cut Busan to Rotterdam voyage from 24 days to 14.
Hyundai Merchant Marine is looking at the possibility of reducing voyage times between Asia and Europe via the Arctic Sea as the polar region becomes more accessible to vessels amid global warming. South Korea’s flagship carrier is mulling a trial sailing of the polar passage route from 2020 onwards with either a polar icebreaker blazing a trail for 2,500 teu-3,500 teu commercial box ships or use of ice-class vessels, according to Korean media reports.
“HMM is reviewing the Arctic voyage as a new idea, but there is nothing definite yet and low feasibility of the plan [coming through],” said an HMM official. South Korean logistics companies such as Hyundai Glovis, CJ Logistics, SLK Kukbo and Pan Ocean have made attempts to sail the polar routes, though they were ultimately unsustainable amid a shortage of specialised vessels and trained crew to deal with the challenges of navigating through such an environment. If realised, however, the potential sea route may become the shortest connection between Asia and Europe, starting from the Korean port of Busan to Russia’s Kamchatka Peninsula, the Arctic Sea and then to Europe. Voyage time between Busan and Rotterdam in the Netherlands could be effectively slashed to 14 days with the Arctic route, from 24 days using the present southern sea route, and would help owners cut fuel and other vessel operating expenses, according to the reports.
The route is now open for about four months in summertime though the pace of global warming and subsequent melting of the polar ice cap may make regular voyages feasible from 2030.
HMM is also mulling the feasibility of deploying more containerships to deal with strong demand on the Asia-US routes in the months ahead. The carrier is anticipating a shortfall in available cargo space between August to October because US retailers are expected to order more goods from China and Southeast Asia in the period, an HMM official said, with freight rates being supported by healthy demand on long haul routes. However, HMM will discuss the matter with its 2M partners, Maersk Line and Mediterranean Shipping Co, before a firm decision is made.