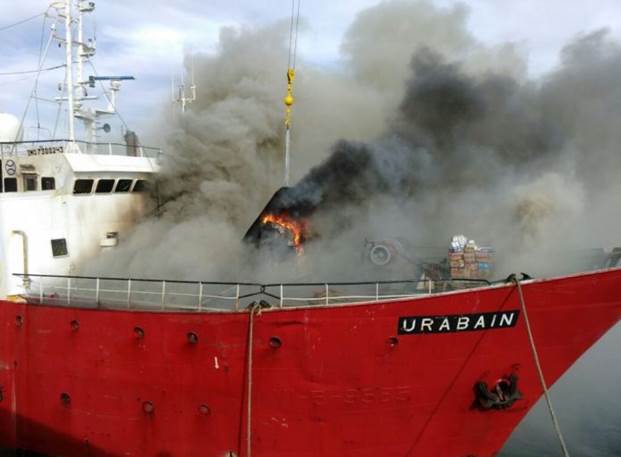 A crew member was rescued, and several sustained injuries when the fishing trawler Urabain (948 gt, built 1975) had a fire on board when it was preparing to depart from the Admiral Storni Wharf at the port of Puerto Madryn, eastern Argentina, at around 14.30 on 7th September. The blaze broke out in the processing plant in a hold with cardboard and nylon amidships.
The local fire services were sent to the scene, by which time around 30 of the crew of 61 plus local stevedores had disembarked from the ship (the others had not yet boarded). All safely left, with the exception of one crew member, who was trapped by flames and smoke in a cabin on the port side. He was subsequently rescued and quickly transferred to Andres Ísola Hospital, as were other crew members, but it is reported that none sustained any serious injuries. Two coastguard vessels cooled the hull from the outside, and water was also poured onto the deck, but the blaze had already spread to the stern, and in the evening they reached the wheelhouse, with concerns that the three full fuel tanks might be vulnerable. The firefighting continued into the night with columns of smoke drifting towards the city with the wind.