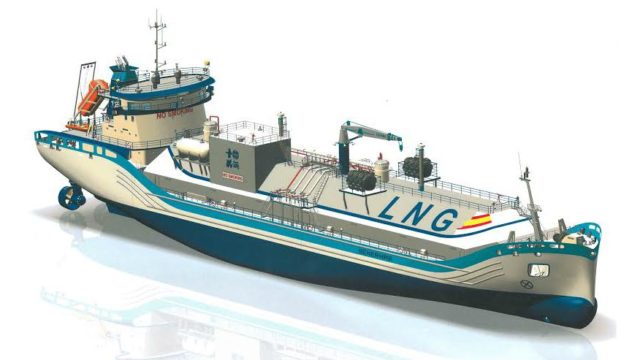 Japan’s Big Three shipping companies, Mitsui OSK Lines (MOL), NYK Line, and ‘K’ Line, plan to enter the LNG bunkering business as they see this as a new growth engine. The trio plan to tap on the experience and know-how that they have gained from operating LNG carriers over the past decades.
NYK, led by Tadaaki Naito, made its first foray into LNG bunkering with its order for an LNG bunkering tanker from Hanjin Heavy Industries & Construction. The vessel, ENGIE Zeebrugge, owned by a joint-venture comprising NYK, ENGIE, Fluxys, and Mitsubishi Corporation, has been supplying LNG fuel in the Belgian port of Zeebrugge since June having been delivered this year and ordered in 2015. On 23 May, MOL, led by Junichiro Ikeda, ordered an LNG-fuellled tug from Kanagawa Dockyard. Upon delivery in April 2019, the tug will be chartered to Nihon Tug-Boat for a long period. The tug, which will be supplied LNG fuel by Osaka Gas, will operate in Osaka Bay. “Knowledge and expertise gained through the development and operation of the tug will be fed back to various types of LNG-fueled ships. The construction of this tug also reflects MOL’s proactive stance in promoting LNG fuel,” said MOL. In February, as part of an organisational restructuring, MOL established a Bunker Business Office to explore the supply of LNG and marine fuels that can serve as alternatives to high-sulphur fuel oil. ‘K’ Line, led by Eizo Murakami, has yet to enter any LNG bunkering initiatives but is looking into options, the company said. “Ahead of stringent environmental regulations, many countries are promoting LNG bunkering so we think there is a good business opportunity,” said a representative from NYK. LNG bunkers can be supplied from onshore tanks and trucks, as well as bunkering tankers built for this purpose. Demand for LNG bunkering tankers is expected to go up should there be more requirements for such fuel.
Compared with conventional tankers that supply heavy-sulphur fuel oil, the construction standards for LNG bunkering tankers involve more high-level technical specifications. In particular, there are inherent challenges in delivering LNG bunkers via ship-to-ship transfers and thus, can only be performed by a handful of companies that have the know-how. MOL, NYK, and ‘K’ Line have been operating LNG carriers for more than 30 years and have thus, built up their experience in managing such vessels and handling LNG. LNG carriers are powered by boil-off from their cargoes.
The Japanese companies can also tap on their established connections with LNG suppliers, port authorities, and bunker suppliers. Many Asian governments are looking to introduce LNG bunkering ahead of the International Maritime Organization’s implementation of a 0.5% cap of sulphur content in marine fuels in 2020. LNG bunkering is seen as one solution to comply with the new regulation.