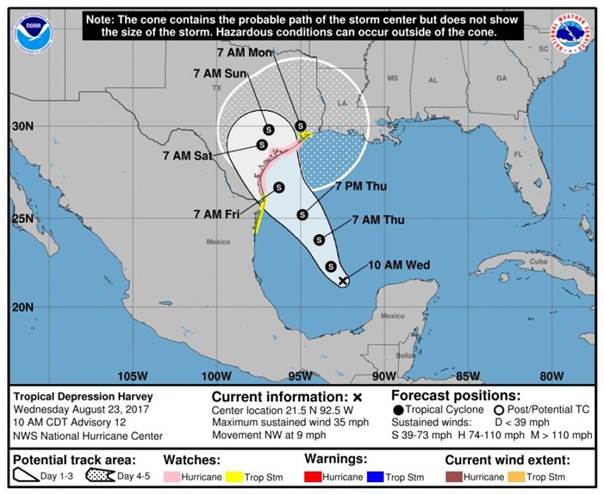 A number of static and mobile oil and gas platforms have shut down, with large numbers of workers evacuated, prior to the arrival of Hurricane Harvey in the Gulf of Mexico off Texas, southern USA, on 25th August. Currently a tropical storm north of the Yucatan Peninsula, Mexico, Harvey is expected to be a Category 1 (119 kph +) or Category 2 (154 kph +) hurricane when it gets close to the coast, making it the first hurricane to strike Texas since 2008. The Gulf Coast from Corpus Christi, Texas, to Lake Charles, Louisiana, is home to nearly 30 refineries, making up about 7 million barrels a day of refining capacity, and is in the path of the storm. Flooding poses risks to operations, while torrential rains can shut units and cause supply disruptions.

Along the coastline, seas could rise 1.5 – 2 metres above ground level, and 25 – 35 cm of rain will probably fall across parts of Texas into Louisiana, the hurricane center said. Some areas could get as much as 0.5 metres of rain. The current track calls for the storm to land in southeastern Texas and then turn toward Houston. Masters said at least one computer-forecast model shows the storm heading back into the Gulf of Mexico early next week before coming ashore in Texas again. Harvey’s path will skirt offshore oil rigs and gas platforms owned by state-run Petroleos Mexicanos in the Bay of Campeche, so the company says that it has no plans to evacuate workers.